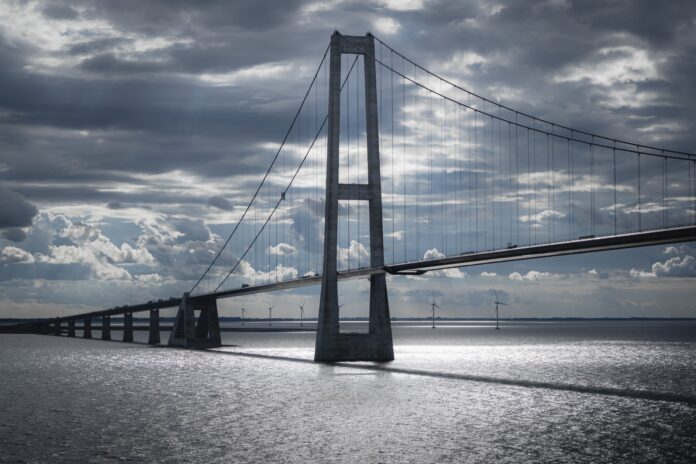 Numerous world-class bridges are each distinctive in their own way. The purpose of modern bridges is to offer easy passage over physical barriers. Despite serving a straightforward and obvious purpose, many of these massive man-made objects have developed significant cultural or historic significance for the local community, entire nations, or even the entire planet.

From Golden Gate Bridge to Rialto Bridge, Bridge of Sighs to Øresund Bridge. They each have a special structure and function.

The Øresund Bridge; the longest motor and rail link between Denmark and Sweden, however, stands out among them all because it is an engineering marvel.

The Denmark Sweden bridge itself has developed into a topic of research, a popular tourist destination, a driver of economic growth, and an illustration of cross-border connectivity.

Known as the “Øresund Bridge,” or Denmark-Sweden bridge

The Denmark Sweden bridge tunnel, which long bridge span over 15.9 kilometers approximately from the Swedish coastline to an artificial island of Peberholm in the middle of the strait, is the longest motorway and railroad bridge-tunnel, combined in Europe. The Danish engineering firm COWI developed the Denmark Sweden bridge’s structure.

In 2002, the Oresund Bridge won the IABSE Outstanding Structure Award.

Since the 1950s, when Sweden and Denmark both joined the Nordic Passport Union, there haven’t been any border checks between the two nations, and people can usually pass the Denmark-Sweden bridge without restriction.

Denmark Sweden bridge tunnel is also a witness to some unusual events, such as Nordic economic and engineering cooperation, the resolution of horrifying real or imagined crimes, free movement, as evidenced by the thousands of commuters who travel both ways daily, and more recently, policed boundaries with associated ID checks.

However, from different points of view, it is a physical link connecting mainland Europe and the rest of the Nordic countries as well as a representation of cross-border ties.

A fixed link across the Oresund is not a unique idea. Oresund has long been a barrier to the movement of people and goods between both Denmark and Sweden. Additionally, it served as a psychological barrier because even the idea of challenging travel inhibited trade and tighter ties.

As urbanization and globalization spread across the whole European continent, the concept of a fixed link became more and more feasible. At the beginning of the 20th century, a number of ideas were put forth; however, the biggest issue was not receiving enough funding and political support, and it did not result in the anticipated conclusion.

The political and economic climate in both Sweden and Denmark improved toward the end of the 20th century, which laid the groundwork for the effort to build the Oresund Bridge.

In order to improve connectivity between the two largest cities in the Oresund Region, it was decided to construct the bridge between Copenhagen and Malmö(Denmark and Sweden) at the bottom of the Swedish coast rather than Elsinore and the narrowest point of the sound at Helsingborg. Strategically, the bridge’s closeness to Copenhagen Airport(the Danish capital) was important.

In 1991, in order to create a fixed link between the Danish and Swedish states, the two governments tried an agreement. The negotiated agreement was approved by the parliaments of the two countries in August of that same year. In accordance with the agreement, both Denmark and the Swedish government operated jointly; own a 50% interest in Øresundskonsortiet.

Loans were used to cover the construction costs, so there was no charge to the taxpayers. The tolls for using the road bridge go to repay the loans and accrued interest. It is anticipated that by 2034, it will be fully repaid.

The first vehicle was driven through the tunnel in March 1999, and the first railway tunnel connecting Copenhagen and Malmö(Denmark and Sweden) was finished in December.

The Øresund Bridge is a significant component of infrastructure and a cultural monument. Since the Denmark Sweden bridge tunnel‘s opening, more than 230 million people have crossed it, 141 million of them by vehicle and the remainder by train.

This fixed link between Denmark and Sweden open up new doors for the people for centuries. Many Danes relocated to Sweden in order to avoid the increasing housing costs in their home country and traveled every day to work.

The Denmark Sweden bridge tunnel links the Central and Western Europe road and rail networks with those on the Scandinavian Peninsula.

The main architecture of the bridge between Denmark and Sweden is made up of two approach bridges and a high bridge that spans the Flinte Channel. The Denmark Sweden bridge has two decks, with the railway running on the lower deck and vehicle traffic on the upper deck. The motorway runs on a separate level. The high bridge features the longest main span (490m) with cable stays in the world for both rail and vehicle traffic.

The two-level superstructure of the Denmark Sweden bridge-tunnel is made of steel and concrete. The bridge’s 82,000-ton mass rests on two railway tracks beneath four lanes of traffic and is supported by a horizontal girder that runs the whole length of the bridge. All along approach bridges, the tracks are set in a concrete trough; on the high bridge, they are on a steel deck.

The 1,611-foot primary span is supported by a cable-stayed bridge. A girder and cable-stayed bridge structure was made to support considerable train traffic and resist significant ice buildup in order to give specified stiffness.

Compression spring dampers were installed in pairs at the centre of the cables to eliminate vibration brought on by many cables in the Oresund Bridge moving under specific wind and temperature conditions.

The Øresund tunnel is the largest submerged tube tunnel in the world for both train and vehicle traffic. Under the Drogden Channel, it consists of 20 tunnel segments.

The elements are 577 feet long and weigh up to 55,000 tonnes each. They were made in Copenhagen’s North Harbor. Eight pieces of 72 feet apiece make up each component. The internal walls of the Øresund tunnel mold were moved and lifted using Enerpac’s CLL lock nut jacks so that they could be transported from the wonderful Copenhagen plant to the building site.

The western section of the Øresund Link, which connects the Peberholm artificial island to the Kastrup airport, is a 4 km long tunnel. The Denmark Sweden bridge tunnel had to be constructed into the island rather than being dug.

Peberholm is a little man-made island in the Danish portion of the Oresund strait that was built as part of the Denmark Sweden bridge Tunnel that connects Denmark and Sweden. Peberholm, which is called to complement Saltholm a small natural island, is located about 1 km to the south. It is 1.3 km2 (320 acres) in size and is located in Denmark.

Swedish rock and soil excavated during the construction of the bridge and tunnel were used to create Peberholm, a protected nature reserve. Oresund Marine Joint Venture built the artificial peninsula at Kastrup that houses the portal of the Oresund tunnel. Its 0.9 kilometers surface is made up of dredged sediment from the øresund seabed.

The natural habitat on Peberholm is fascinating because it allows us to see how species migrate and how plant and animal life flourish in a remote area. On the island, there are some technical facilities as well as a turning area. The material dredged from the Sound was used to construct the island.

On the island, there are hundreds of different animal and plant species, many of them uncommon, and new species are discovered now and then. The island’s flora and fauna have been permitted to develop freely and undisturbed, and as a result, it has become a refuge for biologists.

The island is home to more than 500 different plant species, according to Lund’s Botanical Association, and it is a popular breeding ground for birds and the rare green toad.

The island’s main goal is to establish a crossing point between the bridge and the tunnel.

Since a Denmark Sweden bridge covering the full route between Malmö and Copenhagen would have conflicted with the blockage zones around Kastrup Airport, a tunnel was constructed instead. Another motivation was to give large ships the ability to spread the Oresund without having to worry about the height of the bridge.

The freight train traffic would be restricted if the Denmark Sweden bridge were raised since a steeper gradient would be required. The railway traffic control signals and systems along the border between Denmark and Sweden are regulated at Peberholm.

The ideal spot to view the Oresund Bridge

There are a few locations in Copenhagen and the surrounding areas where you can obtain the best views of the Denmark Sweden Bridge, while there are many great spots where you can see it.

Due to their various geolocations, these locations offer various perspectives of the Denmark–Sweden Bridge as well as a variety of atmospheres and environmental conditions. Having stated that, every location has advantages and disadvantages.

The tallest tower building or a level area that is parallel to the sea bed are the two sites where you can properly appreciate the Denmark Sweden bridge’s architecture and the designer’s idea.

The runways of Copenhagen’s International Airport, which is the closest and from which you can also see the Denmark Sweden Bridge, are set up so that almost all arriving and leaving aircraft cross the Oresund strait.

The Denmark Sweden bridge is a good place to ride if you enjoy cycling. You will pass through Västra Hamnen on the way to your final destination, which is worth visiting due to its winding streets, wonderful beaches, bathing area, and magnificent architecture.

Additionally, you will cross through Ribersborg, a 3 km long beach where you can engage in a variety of summertime activities. There are bathing facilities here as well.

The Denmark–Sweden Bridge represents a new phase in engineering and is Europe’s longest combined road tunnel. That provides new opportunities for the citizens of Sweden and Denmark as well.

The Denmark Sweden bridge tunnel, which connects the province of Scania in Sweden and the Danish island of Zealand, has produced a region with 3.7 million people living in it.

The building of the Denmark Sweden bridge tunnel was a unique piece of engineering. It had elements of a road bridge, a tunnel, and a rail line. It was really surprising how many moving elements and design restrictions there were in the process.

Trade channels between Denmark and Sweden have improved and are thriving since the construction of the Denmark Sweden Bridge Tunnel.

Traffic across the Oresund has significantly increased as a result of the Denmark Sweden bridge. Today, it takes 10 minutes to drive across the bridge. At the toll booth in Lernacken on the Swedish side, vehicles pay the toll fees.

23 famous people that are from spain

7 Popular Weekend Breaks in the UK

Why are networked games better than traditional ones?

What happened to Jamal Edwards? How did he Die?